Do you want to learn about yoga and meditation in the most amazing setting on earth? I found it, it was amazing and now I want to share it with you!

Maybe unsurprisingly, the location for this course was in the yoga and meditation capital of the world, Rishikesh. Also called Yoganagari, which translates to ‘City of Yoga’ this city sitting on at the foot of the Himalayas and along the banks of the Ganges river has been visited by millions of people who seek personal growth, education and peace – most famously by the Beatles in 1968 who did a Transcendental Meditation training course at the ashram of Maharishi.

Rishikesh was as hectic, loud and chaotic as I had expected. I found myself unable to get a cab across the Ganga and had to walk through the streets and across an old rickety bridge with my little blue suitcase. This wasn’t a normal walk, for me anyway, I was surrounded by noise, colour, COWS, motorcycles and the never-ending sound of car horns. It was all incredibly surreal, I felt like I was in some sort of movie. This was not the scene you would imagine a meditation course to be set and luckily it wasn’t. I got to the other side of the bridge and easily managed to get a taxi – there was a queue of them fighting over my fare – which took only 15 minutes to the ashram. It was amazing to leave these hectic streets and within such a short time frame be in a tranquil, remote and peaceful location.

This was my home for the next week

Upon arrival the lovely MamasigitaG, who was the founder, teacher and leader of the course, greeted me. After a short registration, I was shown to my room. I had a private room – something I would recommend if you are doing this alone. The room was simple but more than sufficient – two single beds and a shelf. I shared a bathroom with two other girls, it’s worth noting there was no hot water, light or electricity – meaning that you had to heat it up and have a bucket shower.

After settling in the room everyone met for an intro where we were told about the next 7 days – the rules and the timetable. There were about 20 people on the course and two volunteers who had done the course before along with the teacher. The course was to be in English but there were a group of Russian women who spoke very limited English. We were allowed to have our phones and books however there was no signal so I decided to go without my phone for the entirety of the course – something I would recommend. The ashram also had a library full of spiritual books that you could read. There was a noble silence that needed to be adhered to but unlike some stricter meditation courses such as Vipassana which you can read about here, you were allowed to speak for 2 hours a day – although most chose not to.

Every day followed the same schedule but with a varying type of meditation and yoga. We learned all about Mantra Meditation, Hatha Yoga, Ashtanga Yoga, Yoga Philosophy and Laughter Yoga.

The day began with a wake-up bell at 5.30 am. The role of the bell ringer was something you could volunteer to do and you would be responsible for this the whole day, before Puja, meditation etc. For the deep sleepers, worry not the bell was loud and clear. From 6 – 6.30 am there was a silent meditation, followed by 15 minutes of chanting and after this the cleansing. You cleanse your nostrils with water a salt outside for a range of different benefits ​​like Better Respiratory, Avoid Headache, Improve Breath, Improve Sleep, Reduce Allergen, Avoid Cold Symptoms, Promote Nasal Drainage, Avoid Sinus Symptoms,  Stop Snoring & Relieve Infections.

Following this, there was a breathing exercise to be done called Alternate Nostril Breathing Technique (Nadi Shodhan Pranayama) which ​​Calms and centres the mind.

Then came the yoga – this was very basic and suitable for someone who had never done any yoga before, a great place for any beginner interested in yoga but for teachers or more experienced practitioners it could be basic and get rather boring after a few days.

The most delicious Breakfast even if it was just porridge and fruits and was followed by Karma yoga. The whole group would meet for 30 minutes downstairs and be groups of three would be given tasks – going on a nature walk to pick up plastic, clean the bathrooms, brush the floors of the ashram. There was so much plastic and I enjoyed the karma yoga immensely!

Then came the nature walk from 10.30 am until 12 pm. We would go different places every day, from the banks of the Ganga to waterfalls. One of my favourite moments of the whole experience was swimming in the Ganga on the last day and giving donations to the Ganga, flowers, candles and a standing meditation or prayer before letting them go at the same time was a beautiful moment for me personally and I believe everyone there. The walking was a meditation and we were really in the moment and focused on small things such as breath and footsteps touching the ground.

We returned to a sublime vegan lunch and had free time from 1-3 pm (this was talking time if you wanted) but I mostly read and when the weather was good went to the roof or walked to the Ganga and sat there to enjoy the beautiful view.

Next up we had a lecture and discussion about a new topic each day such as aspects of yoga, how to improve your daily life, how to use and conserve sexual energy. Then it was another hour and a half of yoga, very simple again but one day the two other teachers and I went and did a hard type of ashtanga on the roof with the male volunteer which was fun.  Then there was another breathing exercise.

The Puja is a temple ritual where the eldest of the ashram rings a bell and goes around the group with incense, waving it over everyone. Once this was completed we would all go into the room and sing a mantra song known as the Kirtan. It was awesome, everyone would sit in a circle and pick an instrument – I picked a tambourine and a rattle. Everyone would sit sing and play in unison, feeling each other’s energy and go into a very meditative state following the group’s rhythm – I felt free, it was a liberating experience.

Everyone had dinner together at 7.30 pm, outside-facing one direction to the Ganga we all had a tray with sections, a fork and a spoon. The tray was filled with some of the most fantastic vegan food I have ever had the pleasure of eating – naan bread, salad, one type of vegetable and pastes for the naan. Everything was unbelievably flavourful. You could have a second portion as well which for me was always the case.

All meals were always eaten in silence and we always blessed the food before we started. This little ritual made me enjoy the food even more and it´s something I miss in the western world.

Dinner was followed with a 30 minute guided meditation after which we all went to our rooms and either went to sleep, reflected on the day or read. It was very quiet in the evening, only natural sounds of the Ganga could be heard. However, in the morning’s cockerels and other birds were making some noise!

When talking about noise, the only negative noise we heard was during the day. White water rafters going down the Ganga, a holy river, screaming. For the locals this is terrible so if you happen to be in Rishikesh please be mindful and refrain from doing this, there are lots of other rivers around the world which are not holy!

After my time in the ashram

I felt elated and calm – a true internal cleansing. The combination of fresh air and a vegan diet with no alcohol and importantly for me no chocolate was fantastic. You are made aware of the things that are really important, sharing yoga, spiritual practice and breathing in a group connects you in a different way – there is a lot of time to think and reflect. Things you may have seen as problems before the ashram won’t seem nearly as big a problem after.

If you want to learn more check out their website here: https://www.phoolchattiyoga.com/ 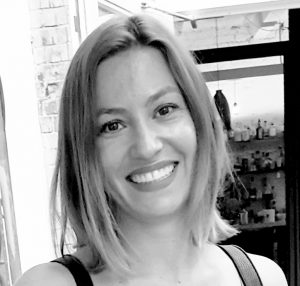 HELLO, I am Nadine

As a yoga teacher and life coach, I support you in creating a full and happy life for yourself. I am convinced that with personal development, we can change the world together to be a happier place. My Vision is to make a difference in the world by what I am doing and helping others to do the same. My Mission is to support people to live a more mindful and sustainable life and become happier.

“A practical step to becoming aware of your self-destructive thoughts and how to change them.

What to do in Ushuaia

My time in Phool Chatti Ashram in India

How to overcome depression and anxiety.

You can find out more about which cookies we are using or switch them off in settings.

This website uses cookies so that we can provide you with the best user experience possible. Cookie information is stored in your browser and performs functions such as recognising you when you return to our website and helping our team to understand which sections of the website you find most interesting and useful.

Strictly Necessary Cookie should be enabled at all times so that we can save your preferences for cookie settings.

If you disable this cookie, we will not be able to save your preferences. This means that every time you visit this website you will need to enable or disable cookies again.